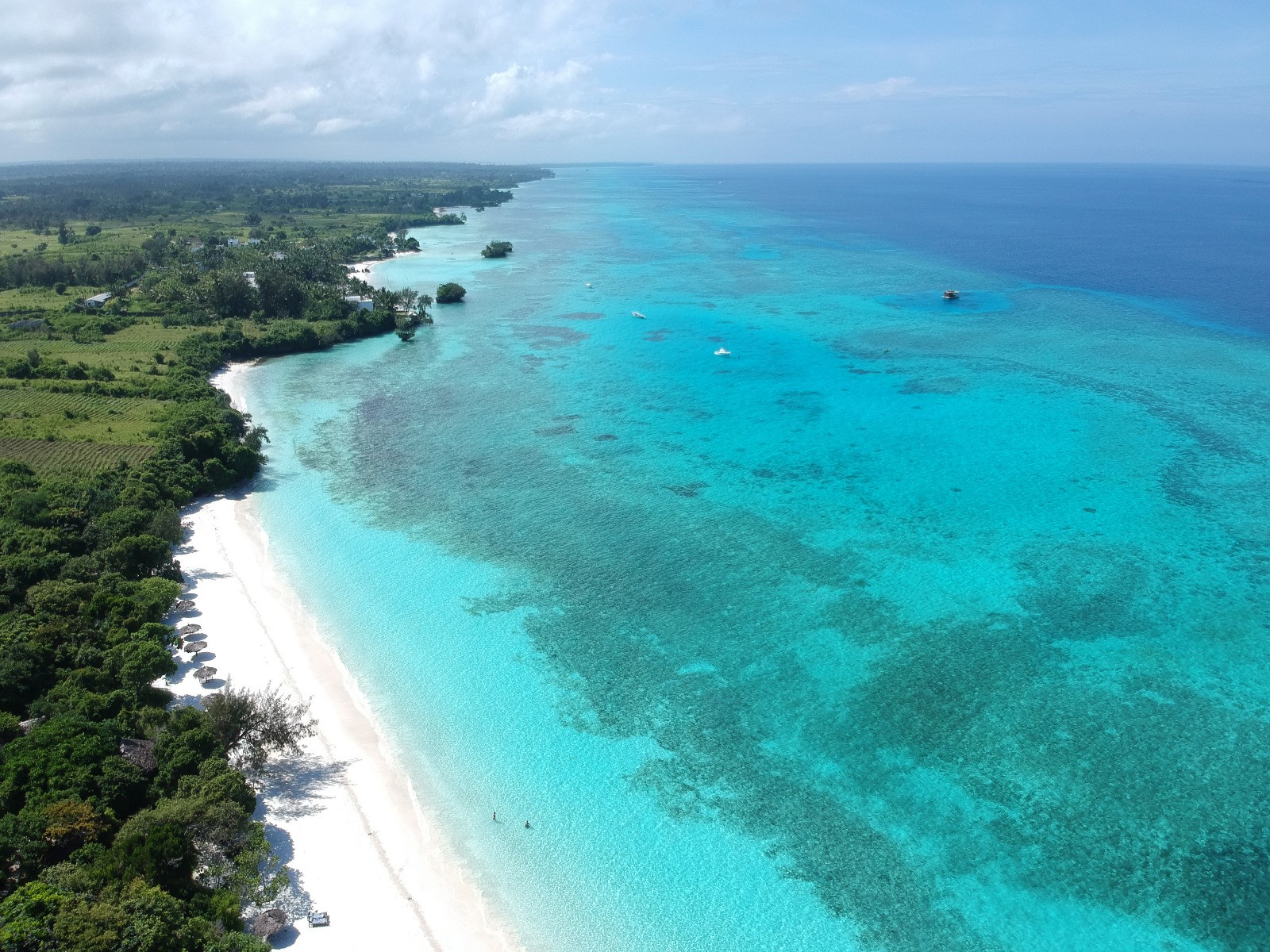 Marine protected areas can buffer against the impacts of climate change, protect marine life from overfishing and provide social and economic benefits to local communities. Read on to find out about our Marine Protected Area Programme!

Marine ecosystems throughout the ocean are under threat from a range of pressures including overfishing, pollution, habitat loss and climate change. Marine protected areas, or MPAs, are a policy instrument that are put in place to reduce these pressures on biodiversity.

Many scientists, government leaders, non-governmental organisations and other groups have called for at least 30% of the ocean to be protected by 2030 – a target that many scientists agree is needed to ensure a sustainable future for both humanity and the natural world. Currently only 6.4% of the global ocean is protected, with just 2.7% considered to be fully/highly protected, so there is still a long way to go.

In October 2013, the Manta Resort did something very special, they worked with the fishermen and villagers to establish a voluntary MPA adjacent to the resort, in which all forms of fishing were prohibited. This represented a major breakthrough in terms of conservation efforts. In 2018 the Kwanini Foundation recognised that a byelaw was important to abide by the legal requirements of the Zanzibar Fisheries Act of 2010 and to underpin the status of the MPA. This byelaw was drafted by the Kwanini Foundation and agreed through consultation with all the relevant stakeholders. The byelaw now designates this area as a ‘no-take zone’, known as the Kwanini Marine Protected Area (KMPA). Within the KMPA all fishing, gathering, harvesting, collecting and cultivation of marine species are permanently prohibited.

The KMPA is only small, covering an area of 450,000 m2, and encompasses the sandy bottoms, reef flat and small patches of seagrass meadows of the lagoon area as well as the fringing coral reef. Off-shore, there are shallow fringing reef flats which drop off rapidly into the Pemba Channel. It is home to a huge range of marine life, including species of commercial importance such as grouper, sweetlips and emperors, many curious octopuses, moray eels, and even a juvenile nurse shark who has taken up residence in a coral bommie! For us this is a huge step in the right direction as sharks are almost entirely absent from Pemba’s reefs as they have been so intensively fished.

But, how can protecting a small area of coral reef like the KMPA provide benefits in such a large area? Simply, the ‘spillover’ effect – the migration of fish and other species from inside the MPA to outside the boundaries – can offset the fact that people cannot fish within the no-take zone. Fish within the MPA are left alone to grow and reproduce and as their numbers increase there will be too many to occupy the area and so some will move outside the boundaries and will be available to catch.

A recent study found that expanding the global MPA network by just 5% could improve future fisheries catch by at least 20%, demonstrating that MPAs can have both conservation and food provisioning benefits! 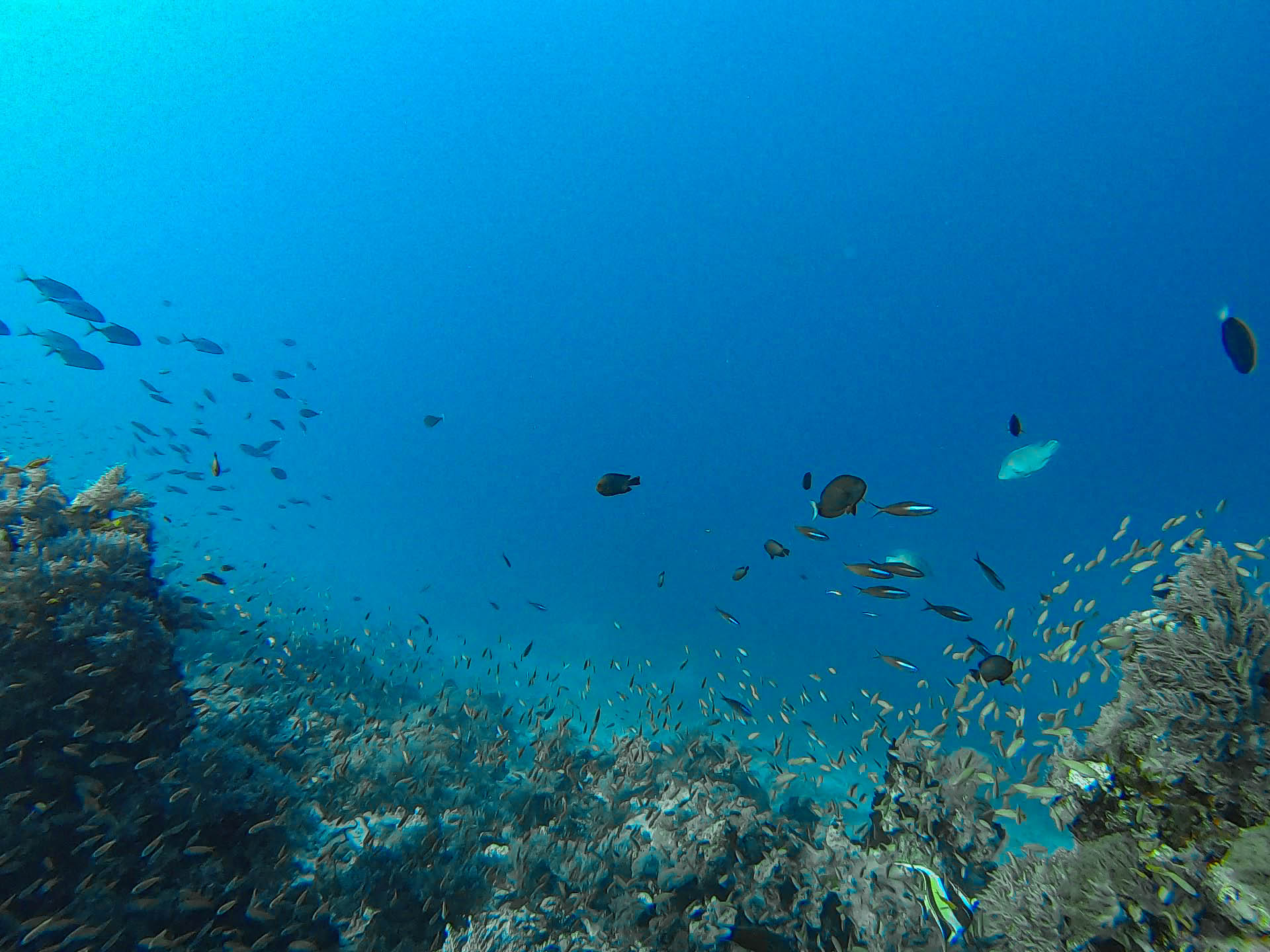 Fish populations inside the KMPA 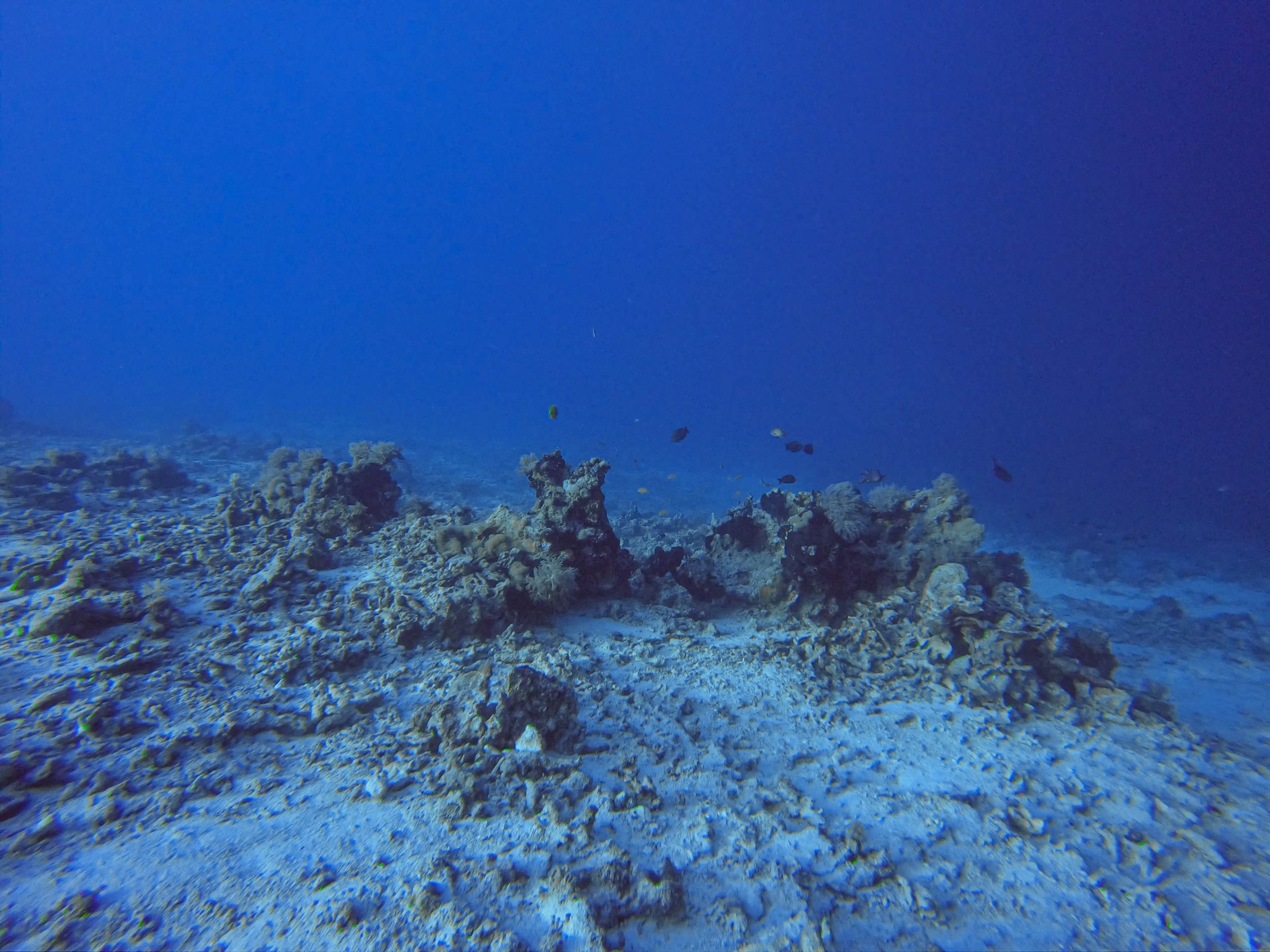 Fish populations outside the KMPA

Our principal actions are to:
Remove the threats to marine habitats and species to halt the loss of biodiversity and degradation of marine habitats.
Protect the remaining resources to maintain and improve the resource base for both local communities and visitors alike.
Restore those habitats destroyed by harmful fishing techniques to enhance the area for future generations.

The Conservation Objectives we have set for the KMPA are to:


Much of our current conservation work is focussed within the KMPA as we work towards achieving these objectives. This includes our reef restoration programme, fish surveys and water quality monitoring.

Any protected area needs to have a reliable and steady financing mechanism to fund surveillance and monitoring at the very least and hopefully to support education programmes around the KMPA. So, the ‘Snorkelling for Conservation’ programme at the Manta Resort was born! Guests pay a small fee to snorkel in the KMPA and the proceeds pay the salaries of our team of nine rangers. The rangers are on duty 24 hours a day, 7 days a week to enforce the regulations and ensure that no fishing takes place within the KMPA. Any excess proceeds go towards funding local community-based projects through our Public Private Community Partnership approach. Using this funding approach we have been able to fund several projects including the Mnarani Village Water Project, the Njao Water Project and Sele’s School and Community Hall.

We believe that we have a sustainable and transferable model for MPA financing and management that could provide a basis for developing a network of MPAs along the western coast of Pemba. We are currently working with the fishermen’s committees on a resource mapping exercise to establish where the best opportunities exist for expanding the network of no-take zones. 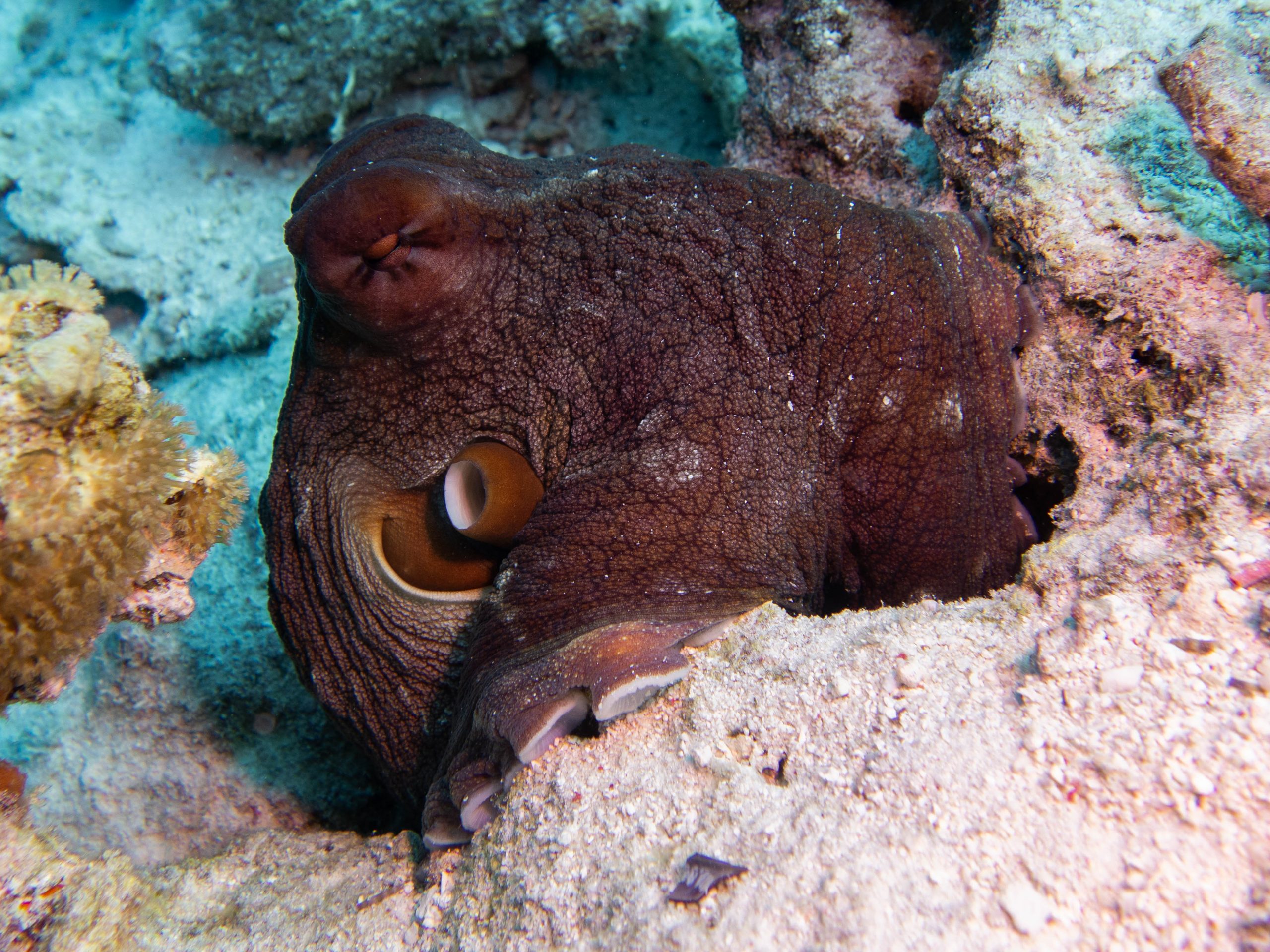 One of the KMPA's residents - the Day Octopus 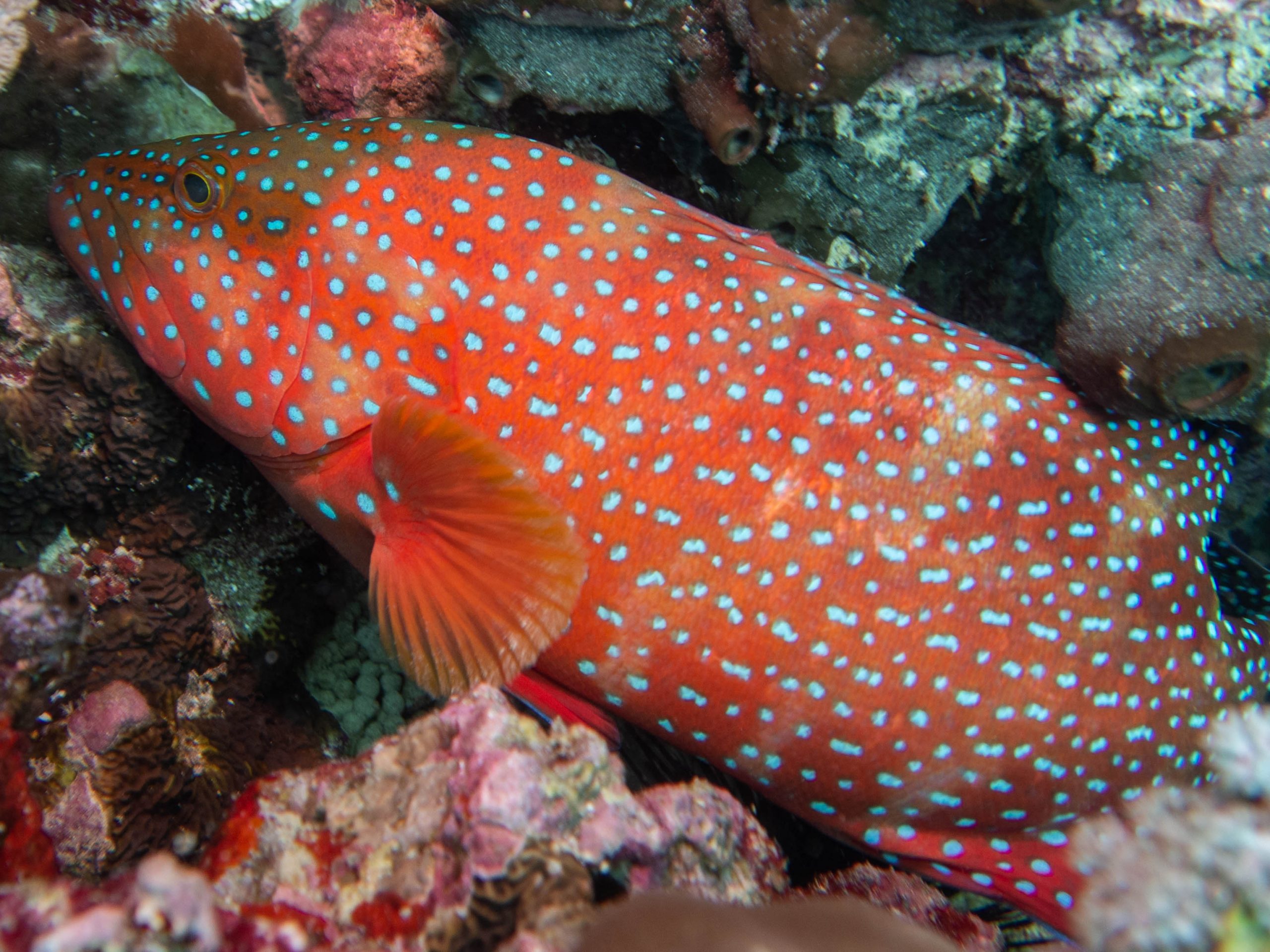 And his co-habitant, the Coral Grouper