The End of a Successful Marine Field Season

The April 2019 marine field season has come to end! Natalie and Lynne from our Conservation and Environment Team lead the surveys with help from David, Mandela, Said and Captains Simba and Addi. The team have been gathering data to understand more about the coral reefs inside and outside of the Kwanini Marine Protected Area (MPA), in north-west Pemba. Each survey aims to tell us something about the current status of the reef and how it changes over time. We have two field seasons annually, in April and October.

One of our surveys involves photographing a 1 m by 1 m quadrat within a fixed 10 m by 10 m quadrat. These fixed quadrats are located within the Kwanini MPA and are being used to detect changes in coral cover and species diversity over the survey periods, and between the sites. The photographs will be analysed to obtain an estimate of percentage cover of substrate (including coral cover) and coral species diversity. 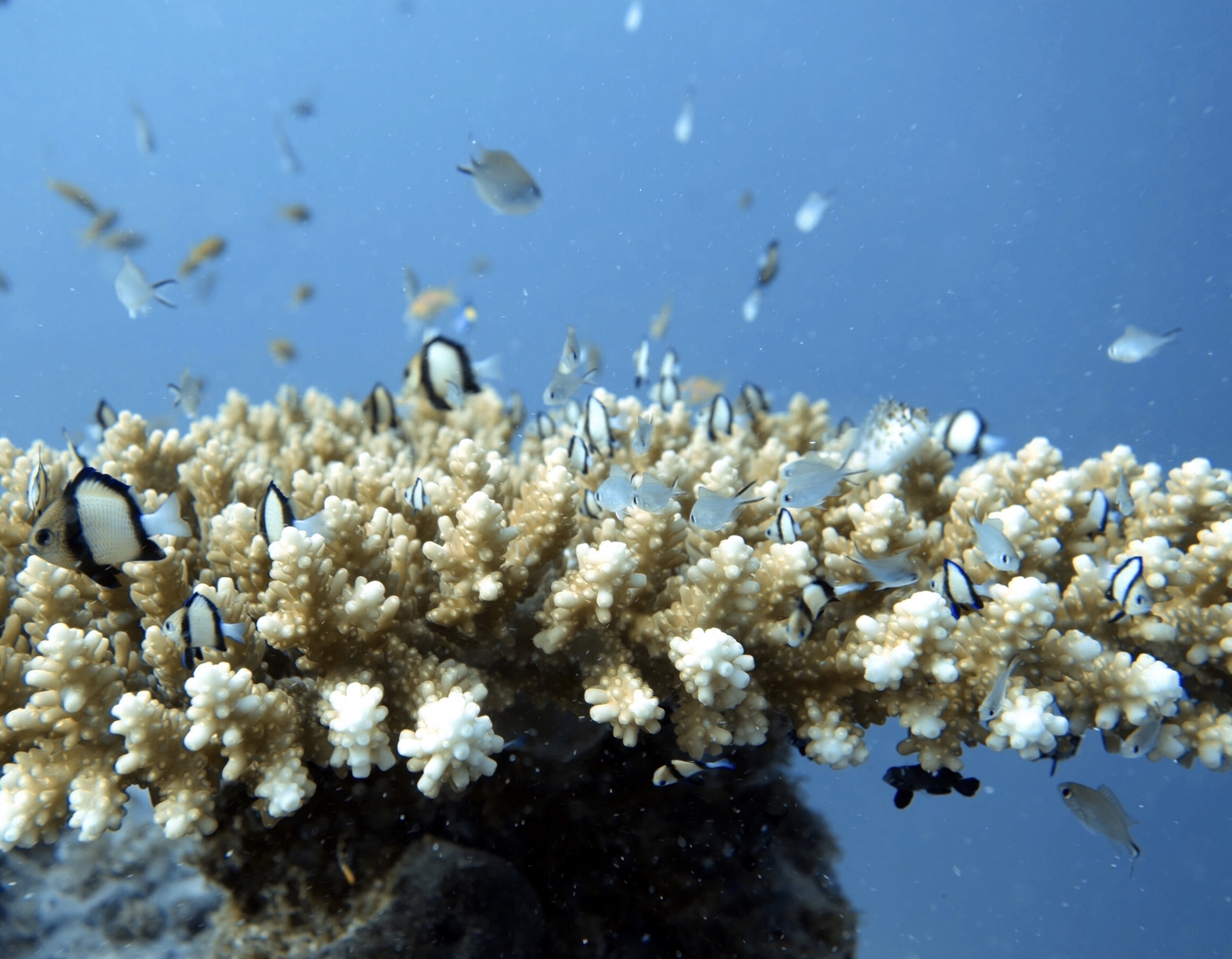 As part of our research we are also looking into the early life history of corals in Pemba including determining what primary factors influence the survival of juvenile corals on the reefs here and whether the low recovery rates on degraded reefs are due to a lack of coral larvae. To monitor coral recruitment, we survey the same locations, both on the reef itself and on the concrete blocks which are used to anchor the Manta Resort Underwater Room to the seabed.

At each location we record all coral recruits and juveniles within a set area and measure their growth every six months. This allows us to monitor the levels of settlement and mortality. This survey season we also started counting the density of sea urchins, crown of thorns starfish and cushion stars as we are interested in whether the presence of these three species influences the levels of juvenile coral survival. We didn’t encounter crown of thorns starfish during any of the surveys, and only noted one cushion star outside of the survey area. We did however count a lot of urchins, 1,041 in total! The low numbers of crown of thorns is reassuring – although it is an important and native species on coral reefs in the Indo-Pacific, crown of thorns outbreaks can occur, leading to extensive coral mortality and widespread damage to reefs. 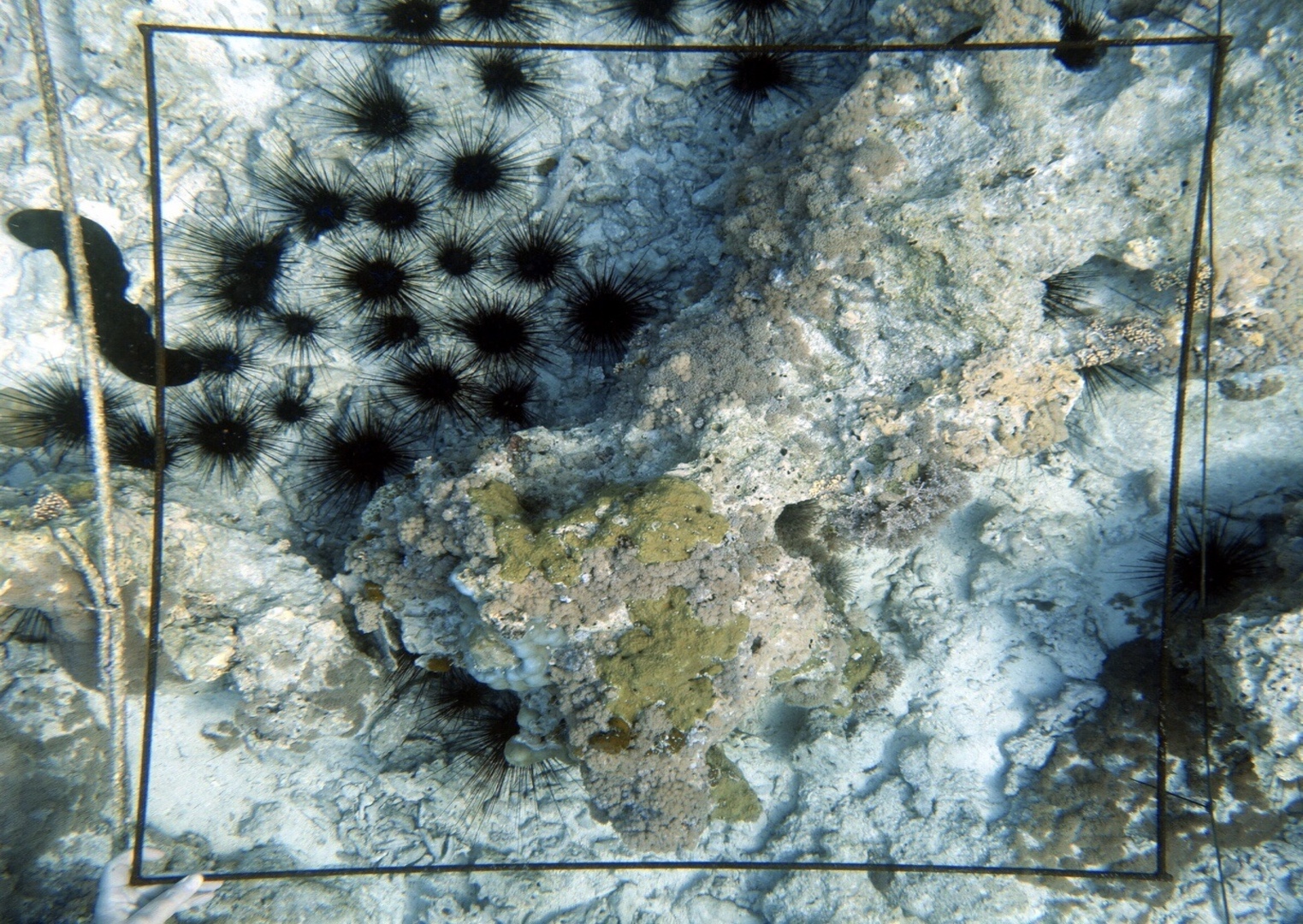 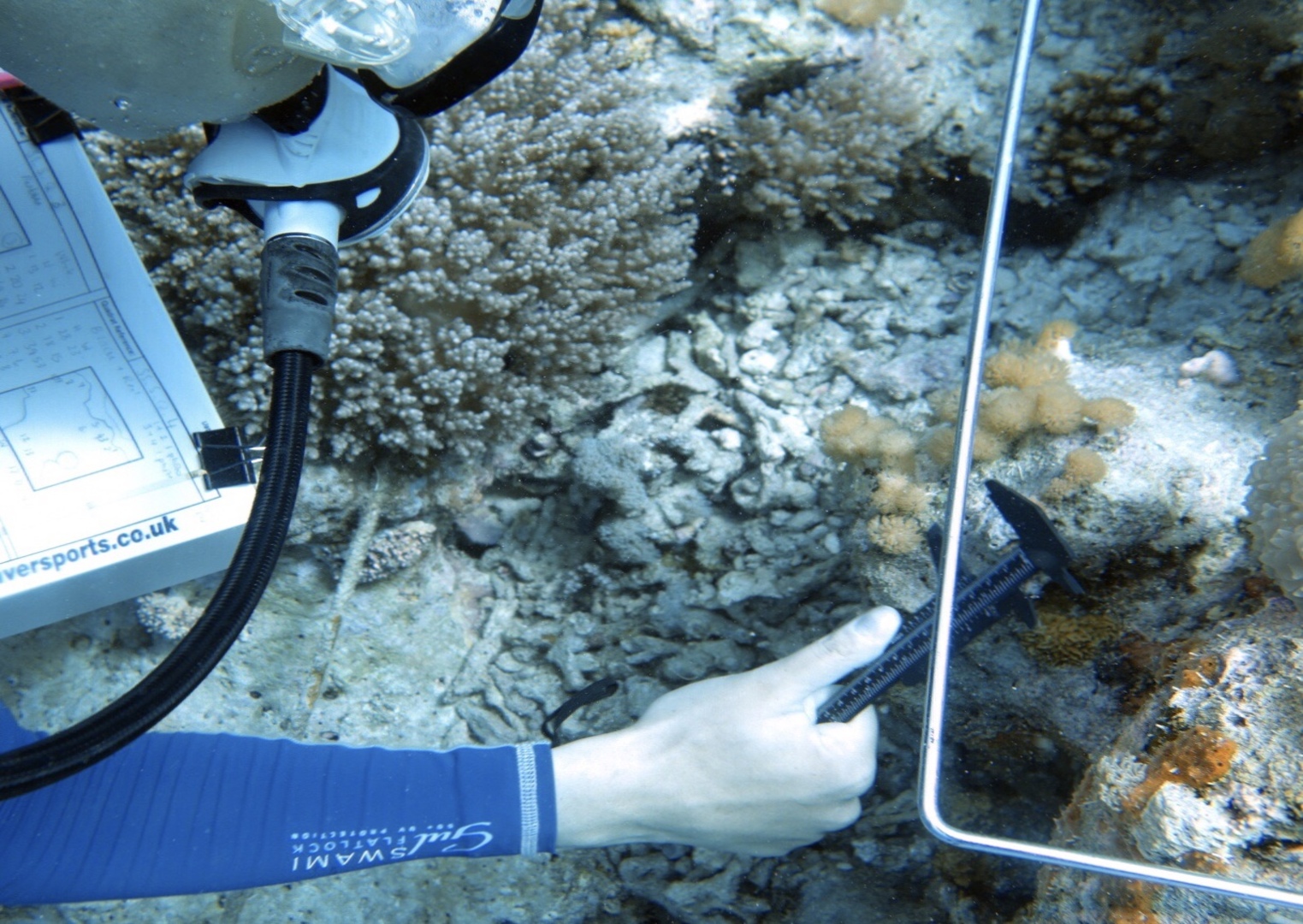 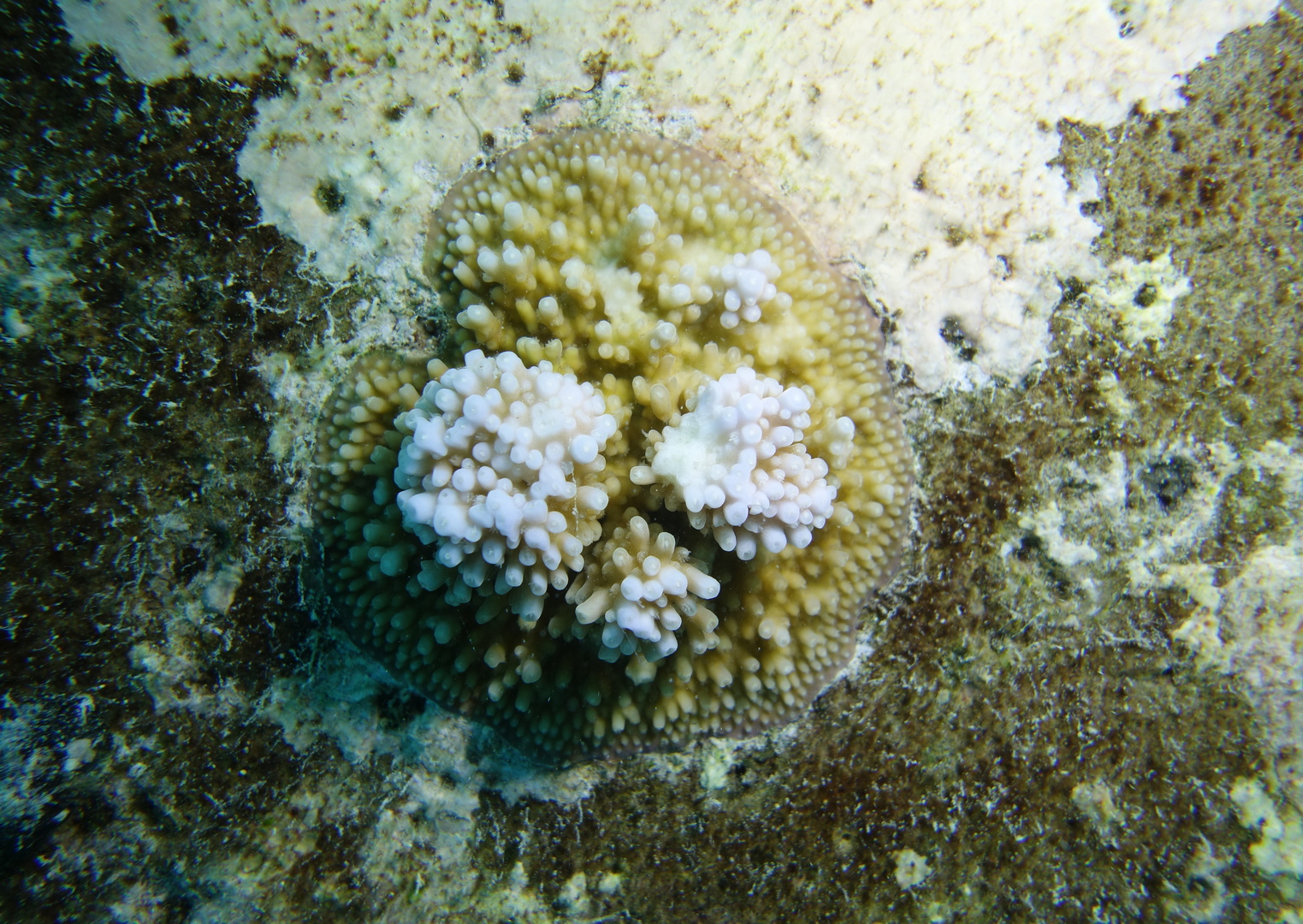 We also did a night dive which gave us the opportunity to see if the populations of sea urchins changed compared to during the day. From what we observed there doesn’t appear to be a big change in numbers at night, although they appear to be more active. We will know more when we have analysed the density data. The night dive was also a great time to spot sleeping fish, wedged in amongst corals or in the case of the parrot fish, encased in a mucus cocoon. When we turned off our torches, we were treated to a light show of marine bioluminescence – tiny creatures which emit a small amount of light, absolutely incredible!

This April we also deployed four Hobo Temperature Loggers; a small probe which can be deployed in depths of up to 120 m, to measure water temperature at hourly intervals. The loggers will stay in place for six months, after which we will retrieve them, download the data and redeploy. The continuous water temperature data will be analysed to investigate the potential of a cool-water up-welling from the Pemba Channel leading to lower sub-surface temperatures on the coral reefs in the north-west of Pemba. We believe that the lower sub-surface water temperatures mean that our reefs bleach far less often than other coral reefs around the world. 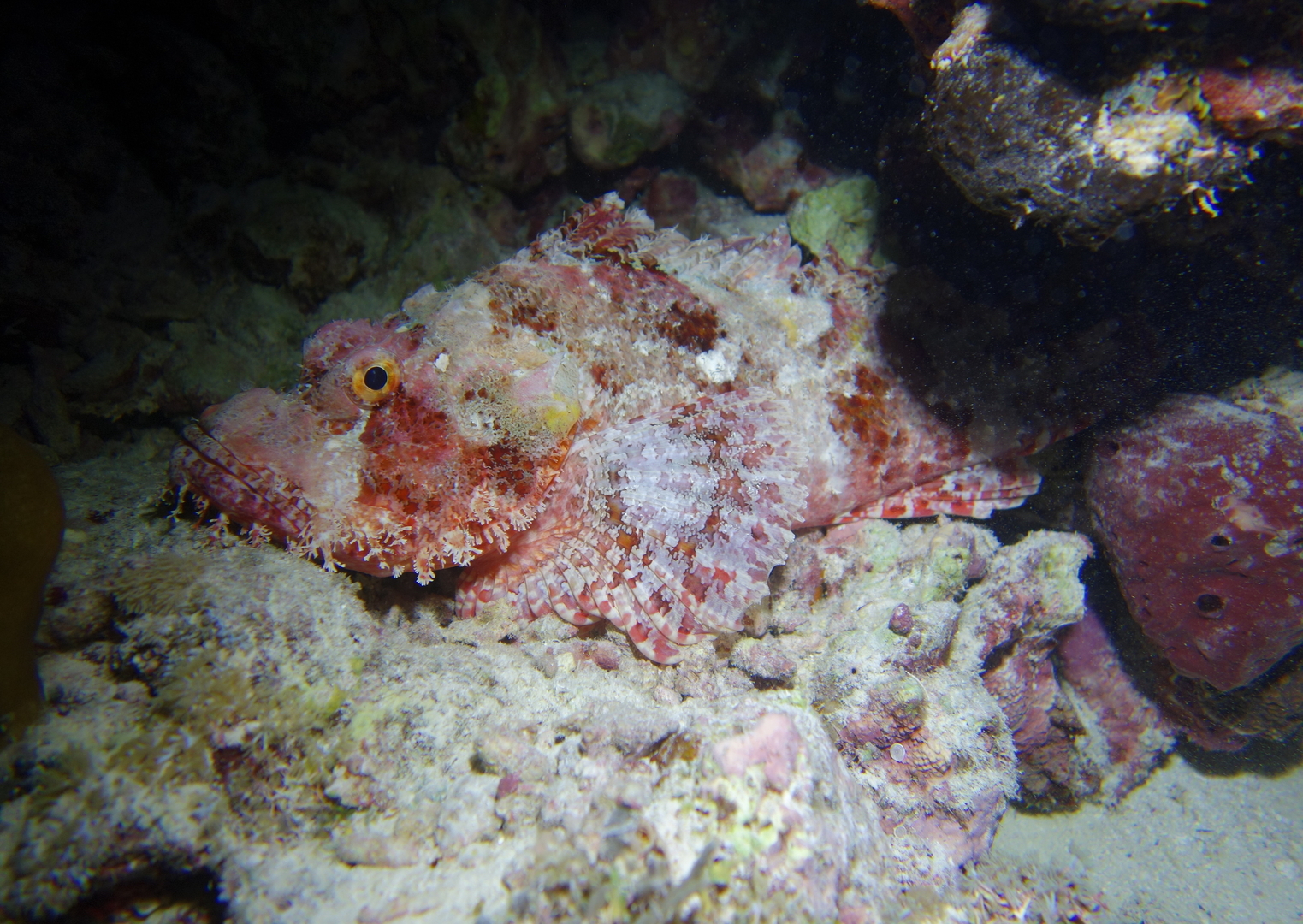 A Scorpionfish during a night dive 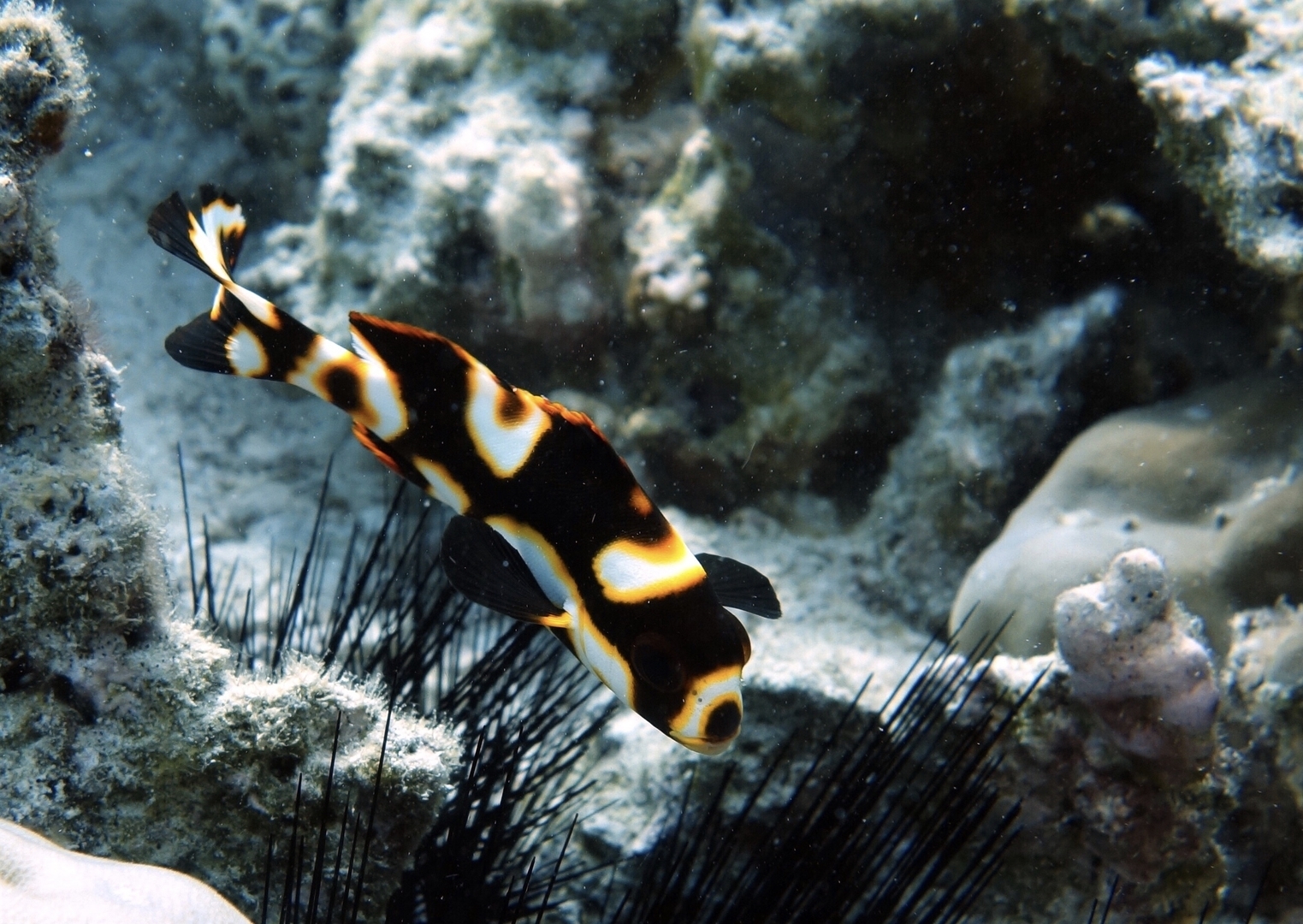 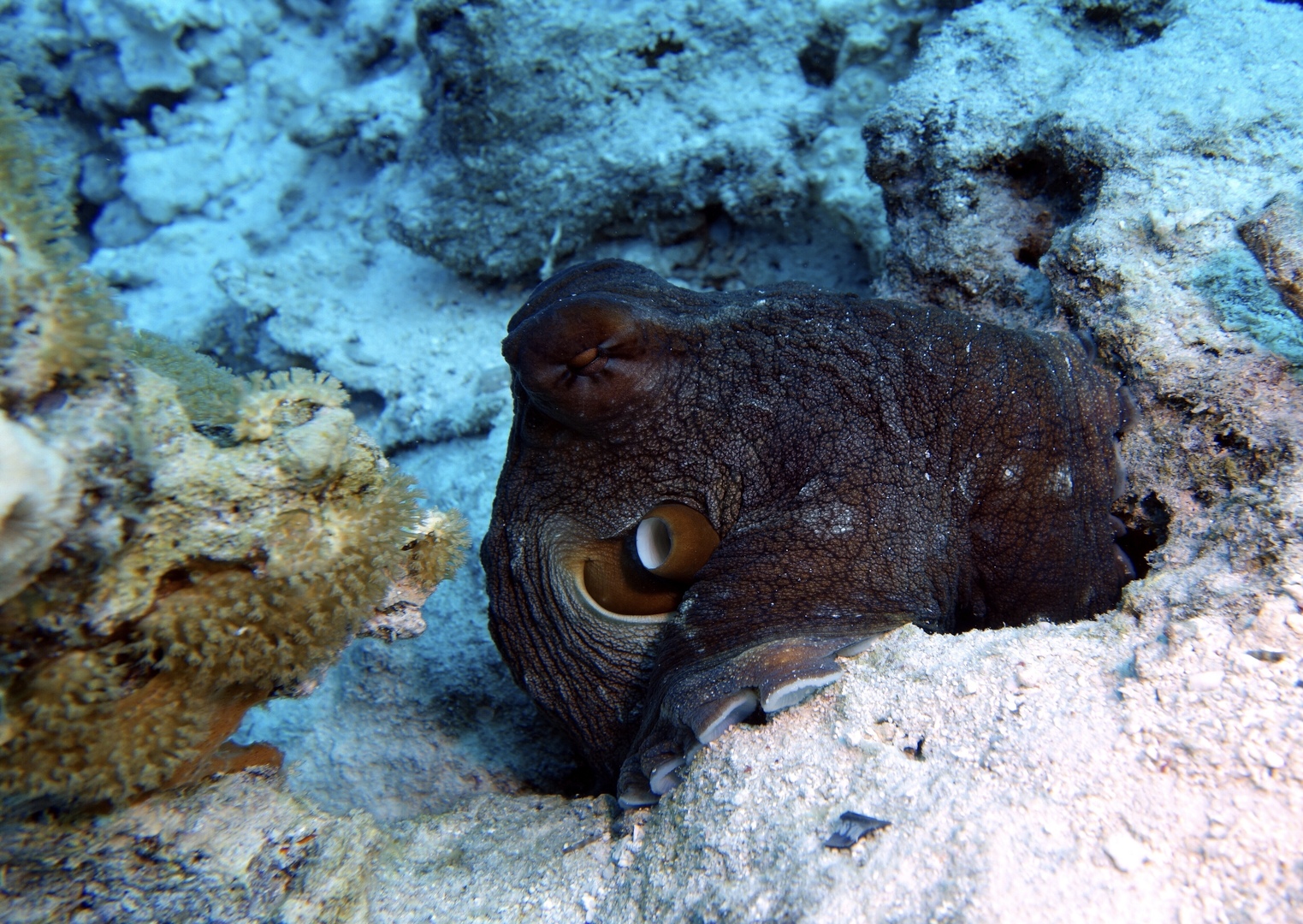 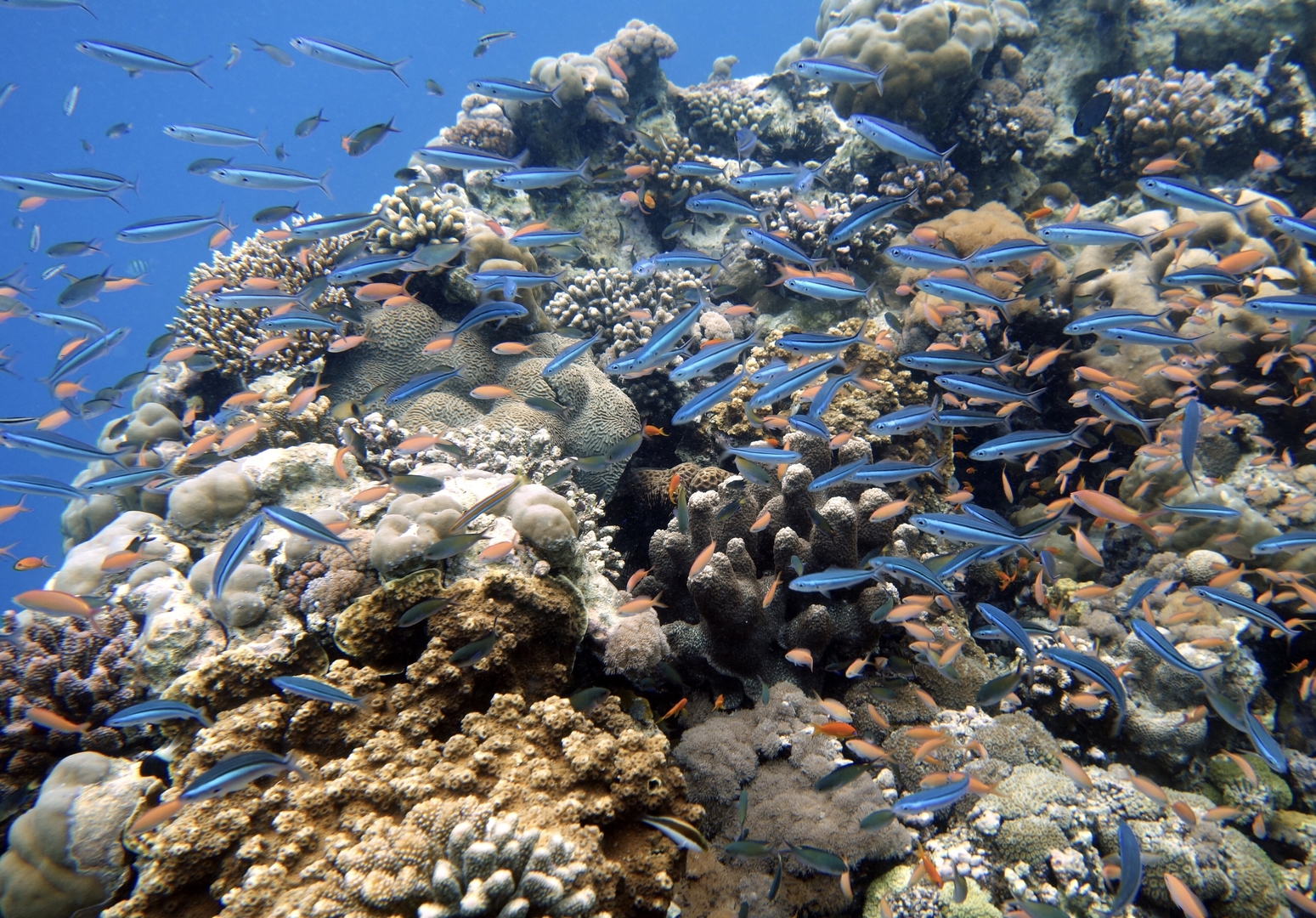 The colour of a coral reef

In addition to the survey work we have been lucky enough to share our time underwater with a wonderful array of marine species. We have had a few curious octopuses who have kept an eye on us, with one even emerging from his hole to inspect our work. We spent one of our diving surface intervals with a pod of spinner dolphins. We were able to observe a pair of Twostripe Goby (Valenciennea helsdingenii) sifting through rubble to build their burrow, a rare sight! And we have seen a huge variety of juvenile fishes including the beautiful Clown Coris (Coris aygula), Queen Coris (Coris formosa) and an energetic, and very camera ready, Indian Ocean Oriental Sweetlips (Plectorhinchus vittatus).

Now it’s time for several months of data processing before we start all over again in October!

Finally, we owe a huge thank you to the Manta Resort Dive Team, it wouldn’t have been possible to get all this work done without such a fantastic team supporting us and assisting where needed.

If you are interested in donating to the Kwanini Foundation please send us an email at info@kwaninifoundation.org for more information or donate online via the link at the bottom of this article. 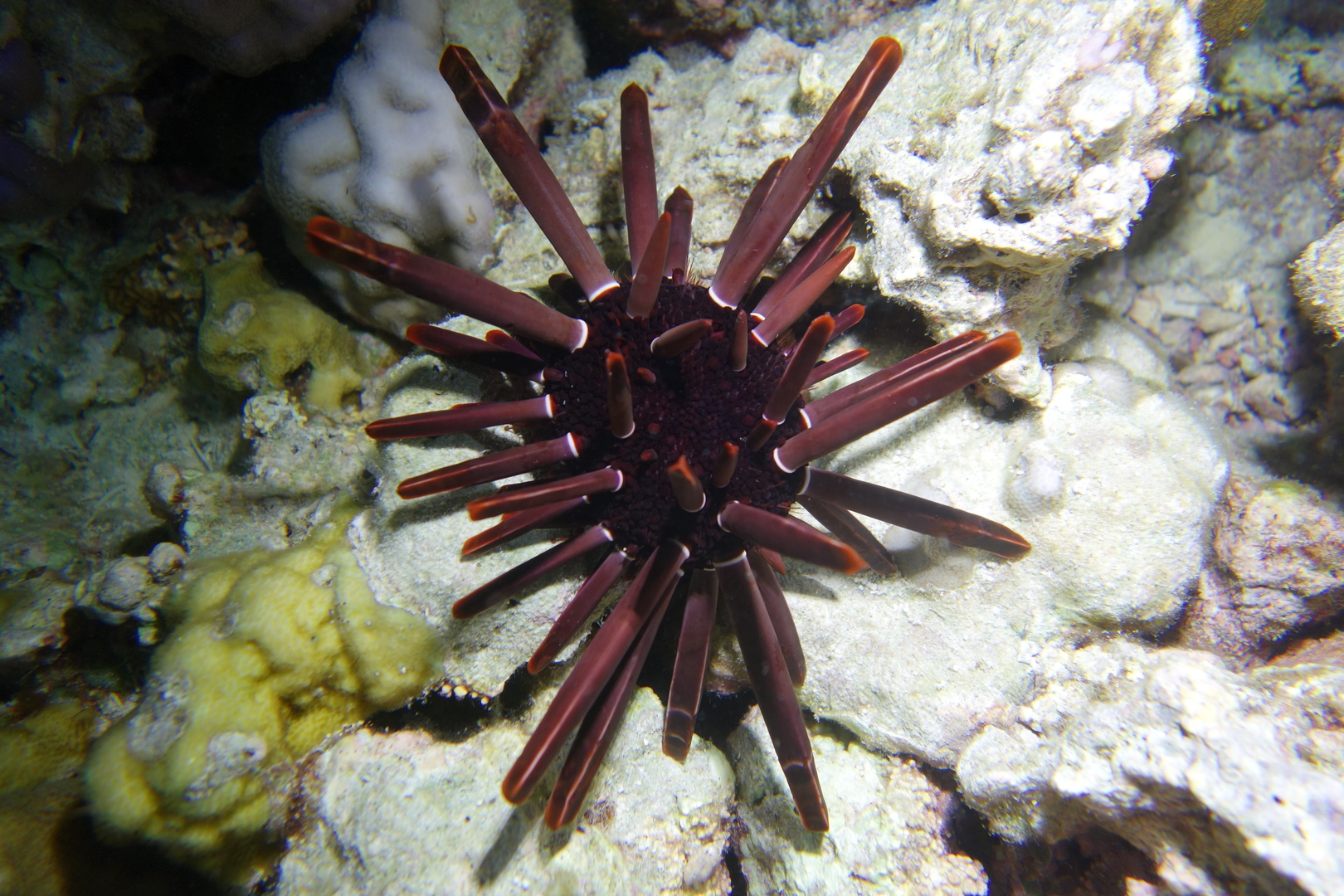 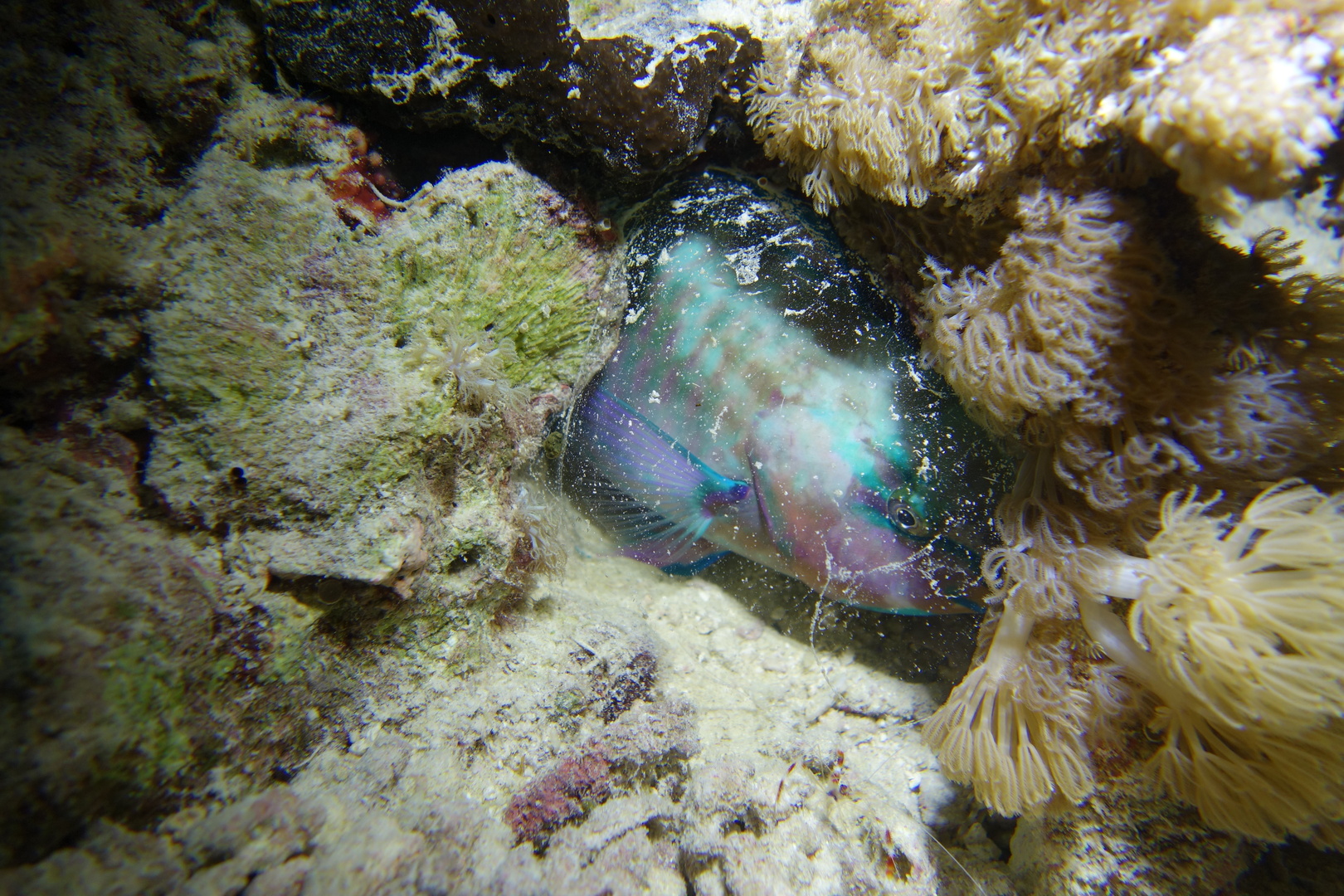