This article, released in conjunction with a training module for our local teams on the ground, will introduce you to the basics of coral reefs, their importance, and the risks presented by humans overfishing the reef.

We started our Mohamed bin Zayed Species Conservation Fund project in February (MBZ Grant Page). Due to the lack of tourism brought about by the COVID-19 pandemic, as well as our own lack of presence due to travel restrictions, we have faced a growing challenge of fishermen encroaching into our no-take-zone (the Kwanini Marine Protected Area); this influx of fishing presents a significant threat to the local marine ecosystem. As part of our response to this new threat, we have launced a new communication campaign to help the local communities understand the importance of the coral reef ecosystem and its intimate association with fish populations that form a significant part of their daily diet. The rest of this article is taken from (with some small adaptations) the main training module which our liaison team members on the ground will soon be using to help our target groups (walking fishermen and youth groups) come to a better understanding of the relationship between coral reefs and fish.

Coral may look like rock, but it is actually a tiny living animal. A piece of coral is thousands of these tiny creatures which have come together as a family where each individual coral provides benefits for its neighbour. A coral reef is made of millions of tiny coral creatures all living together. These coral families take a long time to grow; a piece of coral as large as a boat’s anchor could be many hundreds of years old. The coral reef at the Kwanini Marine Protected Area (KMPA) has taken thousands of years to develop.

Thousands of species of corals have been discovered; some live in warm, shallow, tropical seas (like the waters around Pemba) and others in the cold, dark depths of the ocean.

The coral reef is home to many different animals and plants. Fish and other organisms shelter, find food, reproduce, and rear their young in the natural shelter formed by the corals.

Did you know that 25% of all the fish in the ocean depend on healthy coral reefs? 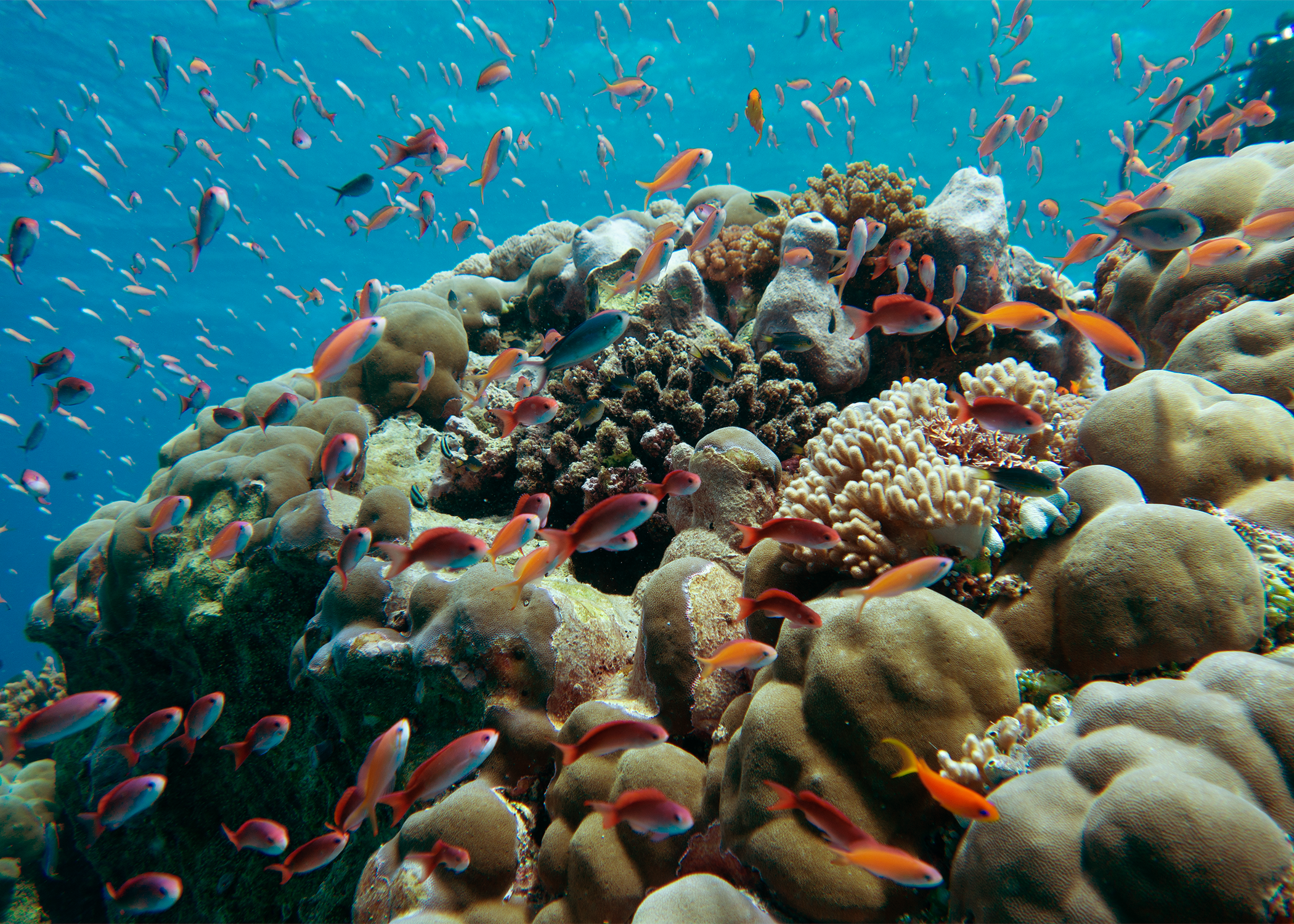 Unfortunately, coral reefs are extremely sensitive. Even touching them can kill them, whether you touch them with your hands or feet – walking across the reef is going to do damage to the corals and stop them growing back.

If simply walking on the reef is going to cause damage, imagine how much damage can be done by dropping a boat’s anchor on top of a coral reef! The coral underneath, which has taken hundreds of years to grow, would be smashed and killed instantly. Here in Pemba, the coral reefs are severely threatened. Some threats are natural, such as diseases, predators, and storms.

The most important threats are caused by people, however, in particular unsustainable fishing practices. The damage caused by using illegal and inappropriate fishing methods can stress or even kill corals, as well as reduce the population of sea creatures beyond the point that they can recover.

For example, ring net fishing close to the reef (which is actually illegal) not only removes larger numbers of fish in one go than the population can replenish, but also can very badly damage the coral reef itself. The nets get stuck on the reef and pulling them up to the surface can rip and break coral away from the reef. As we have already talked about, it can take them hundreds of years to grow back (if at all!).

The reefs are in a much worse condition than they were ten years ago. One of the most significant threats to the coral reefs of Pemba is from illegal fishing activity. Dynamite fishing was used in the past; this caused extensive damage to the reef. Although this destructive fishing method is no longer practised in Pemba, the coral has been slow to recover and continues to experience pressures from other potentially damaging fishing methods. These activities have left large sections of what used to be a vibrant, healthy coral reef looking like a barren wilderness. 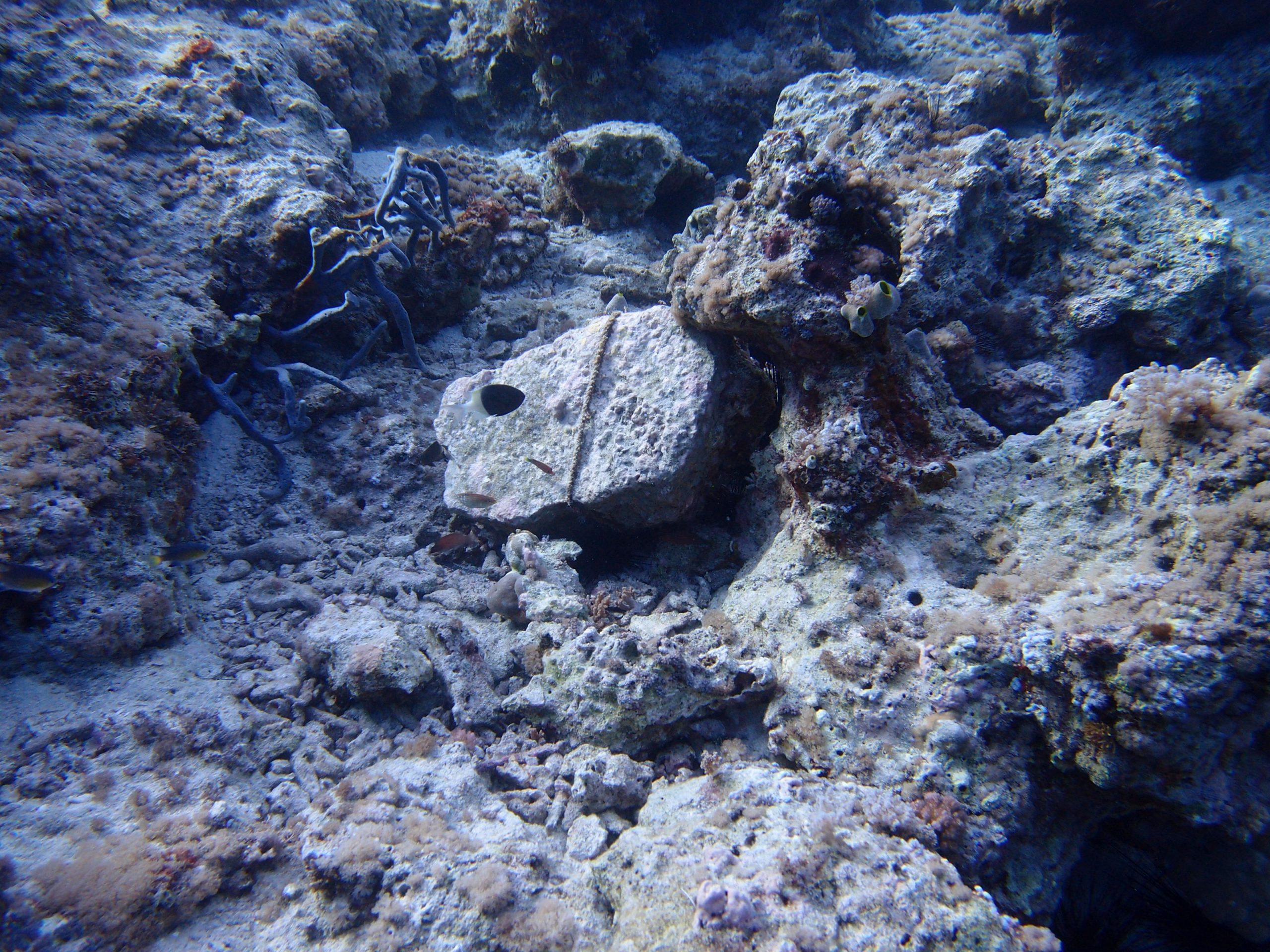 An anchor stone that has landed in the middle of some corals, destroying them 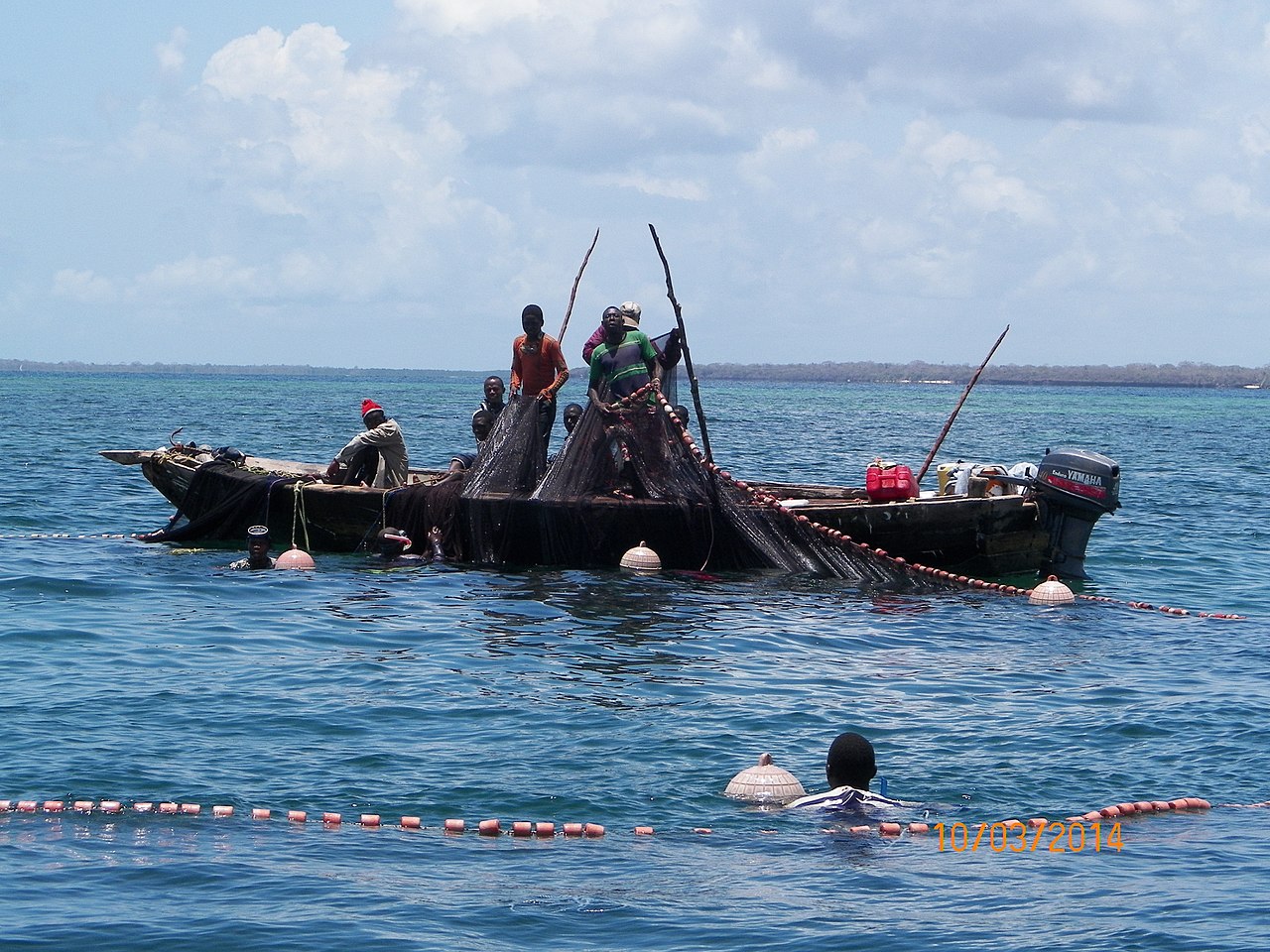 Fishermen using ring nets, which can damage the coral

Coral reefs protect coastlines from storms and erosion, provide jobs for local communities, and offer opportunities for recreation. As we have talked about already, they also sustain the most important source of food here on Pemba. Over half a billion people around the whole world depend on reefs for food, income, and protection from weather. Fishing, diving, and snorkelling on and near reefs contributes significantly to the local community in more ways than one, either by directly providing money to local businesses or by creating the need for more local jobs. People won’t travel a long distance and pay a lot of money to visit Pemba if the reef has died out and there is nothing left to see.

If the reefs continue to die, the fish populations relying on the coral will also either leave or die out, and many other marine species could vanish forever. This means the fish required by local fishermen either for income or food will vanish. Trevally, Tuna, Grouper – these fish will lose their own sources of food, which means they will disappear and can no longer be fished. If they cannot be fished, there could be horrific consequences for the fishing and coastal populations of Pemba.

Remember: No Reef, No Fish, No Food. 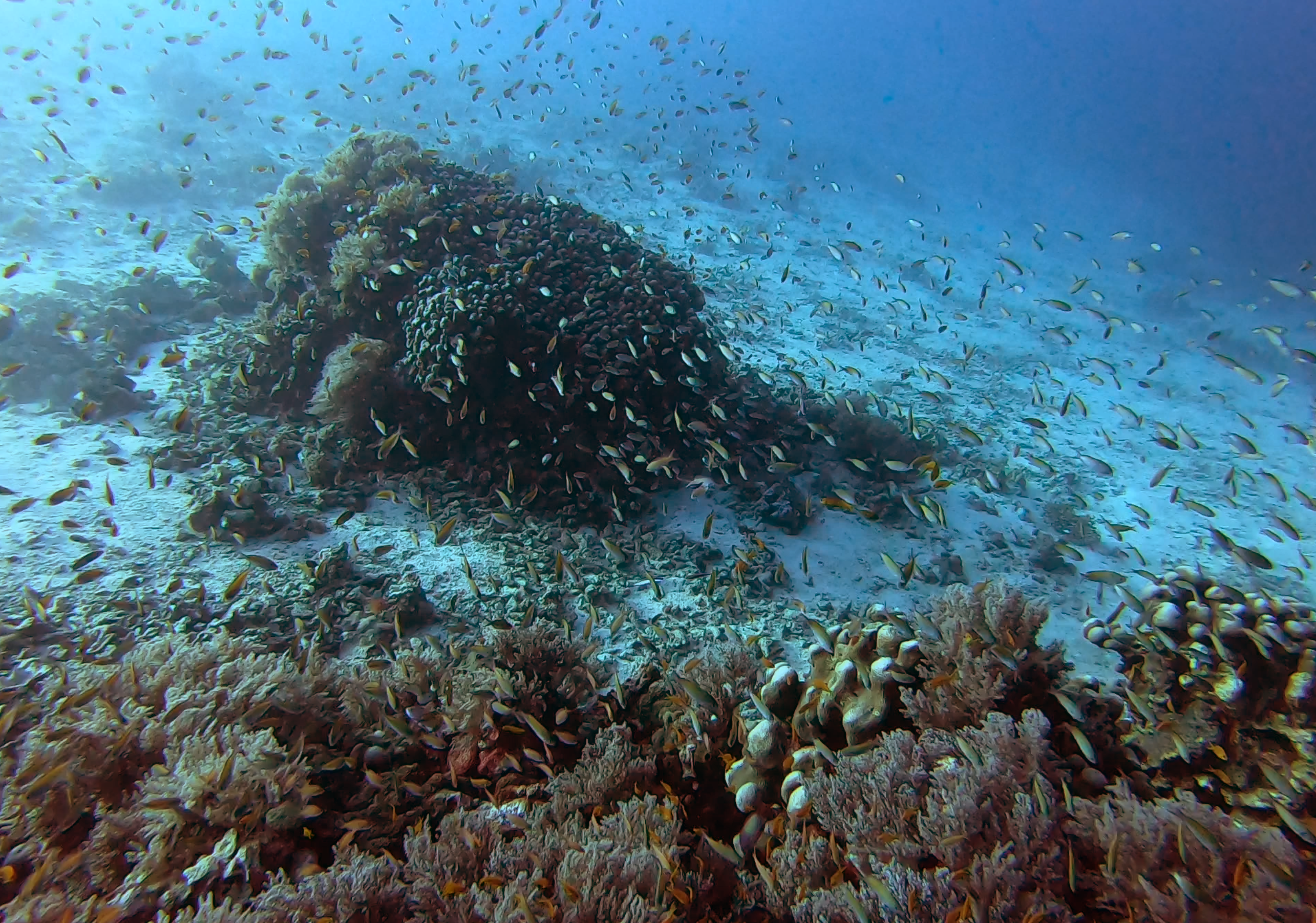 An area filled with living coral, and the bountiful fish population drawn to it 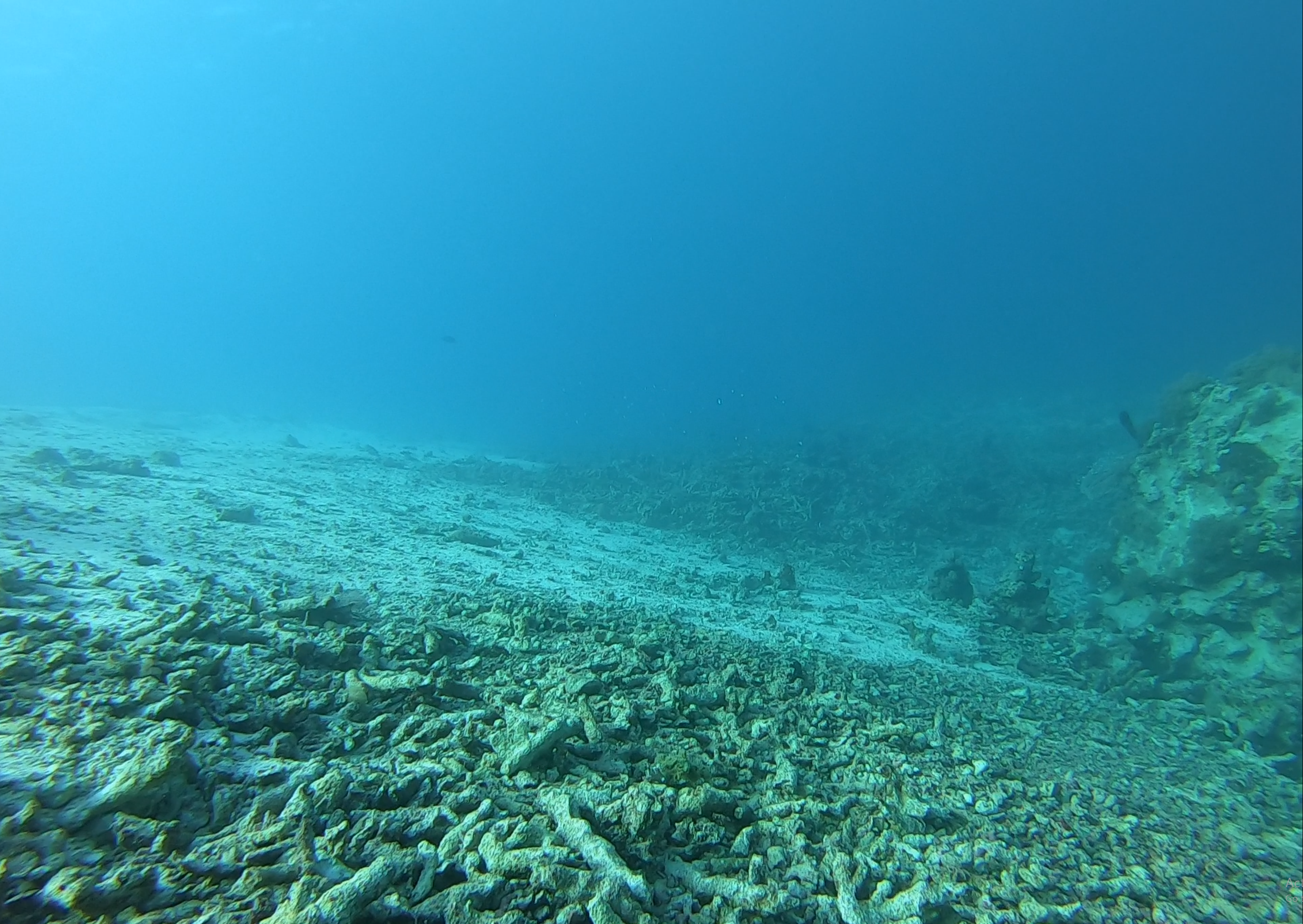 A similar area of destroyed coral, with no fish present

To protect the coral reef, the Kwanini Foundation has set up a Marine Protected Area outside of the Manta Resort, as you know; this area is a section of ocean patrolled by our ranger team and is a no-take zone. This will help us to remove threats to the safety of the reef, and protect it from those threatening factors making a return. To support these efforts and help restore the damaged sections of the reef, the Foundation has begun a programme to aid coral growth on difficult and dangerous areas of the seabed, using specially-made support structures to facilitate coral community replenishment.

Although the KMPA is only small, it is home to a huge range of marine life including species of commercial importance such as grouper, sweetlips and emperors, many octopuses, moray eels, and even a juvenile nurse shark, which is exciting as sharks are almost entirely absent from Pemba’s reefs as they have been so intensively fished. This is all thanks to the protection offered by the KMPA, which allows these threatened species to thrive, rejuvenate, and hopefully one day soon spread around the island once more.

By protecting small areas like the Kwanini Marine Protected Area, we can produce more fish and help ensure a plentiful catch for many generations to come. One of the Kwanini Foundation's key messages to the local communities therefore is that should an individual or group continue fishing in the no-take zone, whilst they may gain a short-term benefit the risk presented to the sustainability of their community's food supply and income will increase, producing a knock-on effect to the livelihoods of future generations. 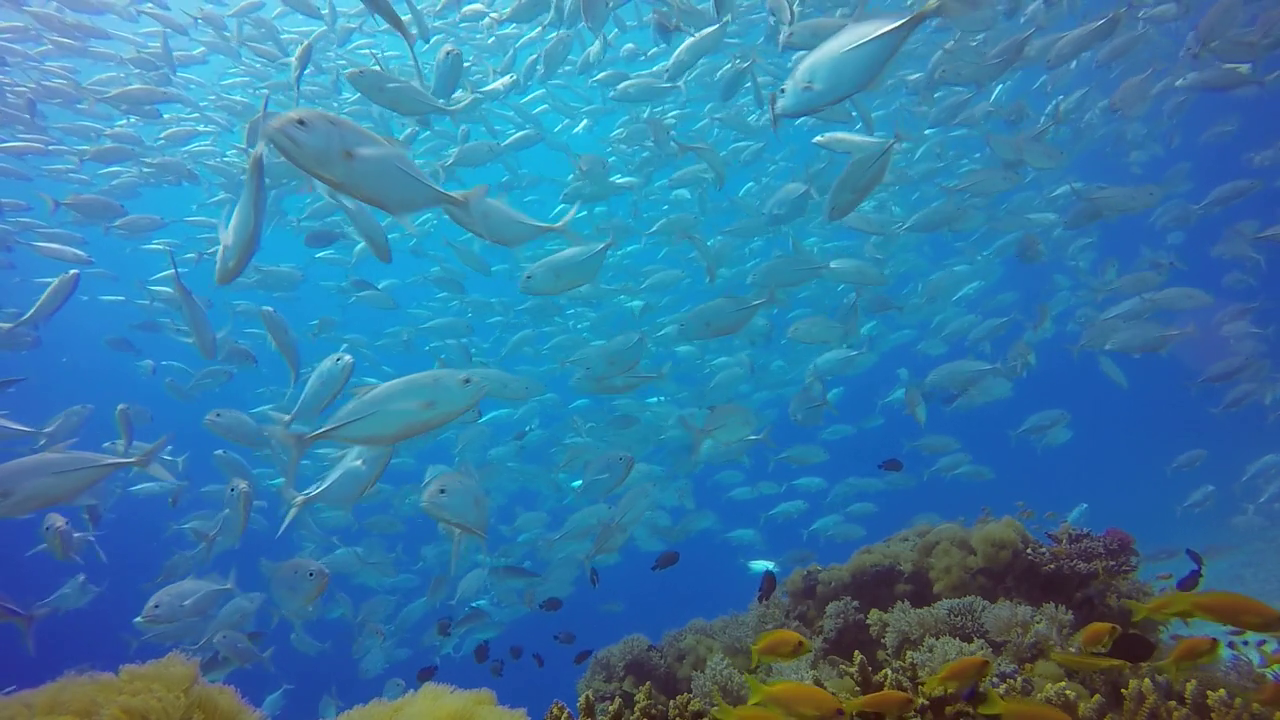 A school of trevally, a major food source, flock to the coral reef 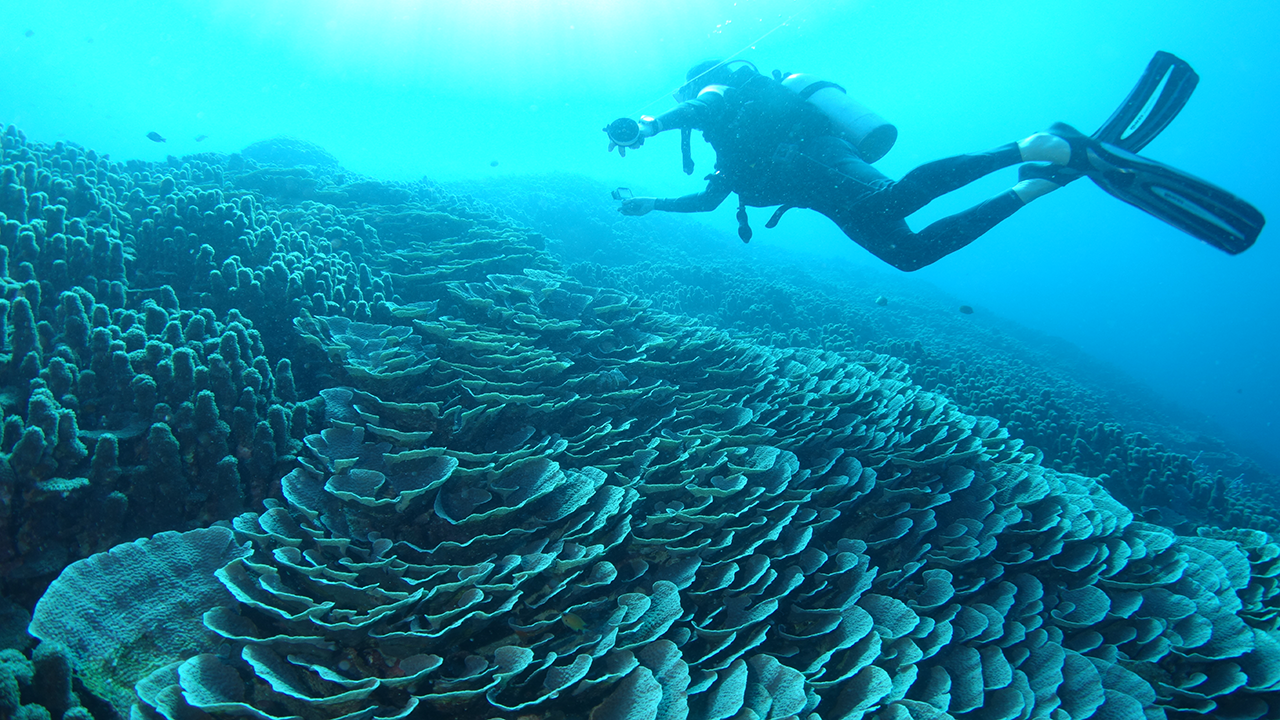 One of the beautiful coral reefs of Pemba, which we hope to preserve for many generations to come

Below you can see a flier, an example of one of the materials we have developed to promote the No Reef - No Fish - No Food campaign which will be used by our community liaison team as they take this message to the local fishing communities.